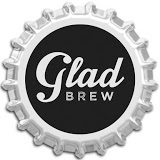 It’s not a secret, I am new to this.  I took along my good friend Megan as moral support. We were both nervous to do our first interview, but John and Johnny of Gladstone Brewery in Courtenay BC made us feel right at home.  As soon as you see their place on Cliffs Avenue you want to go in.  It is in a location that housed a garage for more than 50 years and Stephanie and Mike, the owners, have kept the 1960’s charm and used it as the theme for Gladstone.  Everywhere you look there are kitschy antique car and repair themed items that are neat to look at but also provide a grandma and grandpa’s house feel that makes you want to stay.  The patio is a fair size and will no doubt be the “place to” be on hot summer nights in the valley.  When you also factor in the great staff, incredible Pizza and some of the best beer on the island, it’s no shocker that Gladstone Brewery is doing well and gaining an excellent following.

When you asked for John at the brewery in 2015 you got a choice.  John 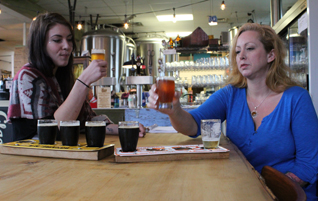 Parker started out being a loyal customer but eventually worked his way up to manager as both the company and his love for graft beer grew.  He has many plans for Gladstone this year which include everything from participating in some of Courtenay’s many events both food/beverage related and otherwise, to launching some tequila and whiskey aged brews. There are also some fund raising and philanthropy projects in the works. He even let us taste their Brett which wasn’t finished yet but sure made us feel special!  He was genuine and welcoming and sure has learned a lot about beer and the industry considering he’s a newbie too.

Johnny ­­­­­­­­Adaire was the brew master for Gladstone when we visited in February 2016. He had put in countless hours crafting 8 beers at a time and doing a great job on each. He has unfortunately moved on this spring to a new project in Vancouver.  He grew up in Victoria BC and had come to them from Parallel 49 and BnB Brewing where he honed his skills as a brew master for several years before jumping at the chance to move back to the island and bring craft beer to the people outside of Victoria.  He makes the process look effortless as he does his gravity test, temperatures and Co2 levels on many of his creations.  Daniel is now brewing for them with the help of a few assistants to do the grunt work. 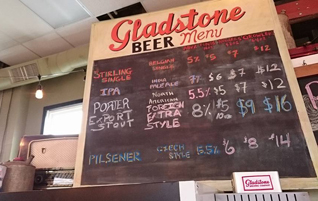 When you look around the brewery it is almost unbelievable that they have produced more than 20,000 HL of beer in their inaugural year.  It is a tight space but it works.  They have some excellent equipment and have already had to expand their facility to accommodate the area’s thirst for quality craft beer.  Gladstone Brewing Company has made the business decision not to bottle or can their product for the time being.  It is pretty much their only option with limited space, but the decision has not hindered their success as they are already barely able to meet demand.  You can find them on tap not only at the brewery but in several restaurants and pubs like The White Whale in the area but also as far away as Vancouver and Powell River.  You will see their logo at local events, Beer Week and of course Beer Fest and undoubtedly will be a destination for craft beer lovers visiting the island from all over the world.  It is worth the drive.  Here is an example of what we were lucky enough to sample:

Gladstone is lucky enough to share the building with The Guerrilla Food Company.

The mix of both people and product is effortless as they complement each other greatly and are both benefiting from the arrangement. They have an interesting, clever and adventurous menu that is doodled on paper and stuck on the walls.  The patrons that we spoke to that day had nothing but praise for both the food and the beer and happily stuffed several pieces into their mouths nodding aggressively when asked if it was good….it sure smelled good!  All in all the experience was great.  We highly recommend taking the drive up to Comox Valley to visit the crew at Gladstone Brewery and check out what they have to offer. 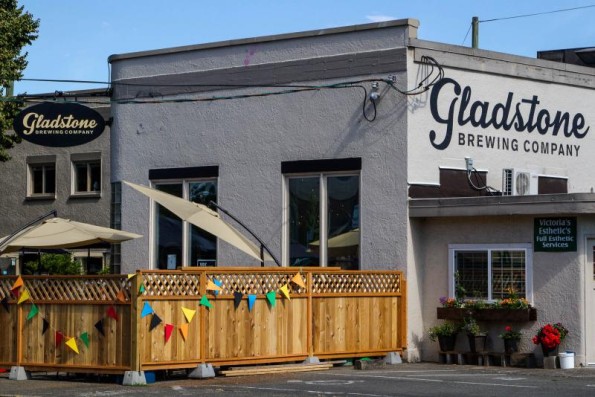