What is better with beer than BBQ? Summer daze are just around the corner so we thought it would be a good time to share some ideas about how to use your favorite craft beer other than to pop a cold one. Try one of these flame-tested techniques!

Use your favorite local craft beer…..

As a soaking medium for wood chips. It slows the combustion rate of the wood so that it smolders and smokes, not burns.It gives you a hint of beer flavor in the process.

As a humidifying agent in your smoker. Add your favorite brew to the drip pan of your water smoker to keep the meat moist. It may add a subtle beer flavor that becomes more pronounced the more beer you drink.

As a marinade. The malty- hoppy flavor of beer, particularly dark beer, tastes awesome with pork, beef, and chicken.

As a basting or mop sauce. Mix 1 cup dark beer with 1 cup honey, ¼ cup of melted butter and a few tablespoons of minced ginger. Use this mixture for roast suckling pig, or smoked or spit-roasted pork shoulder.

As a spray. Put your thumb over the top of an open longneck (preferably a Vancouver Island Brew). Shake gently, then slide your thumb back a millimeter or so — just enough to release a carbonated stream of beer, which you direct towards the brisket, pork, or spit-roasting chicken in lieu of a mop sauce.

As a barbecue sauce. Used sparingly, beer makes an interesting addition to barbecue sauce — especially a flavored beer.I say sparingly because the hops can leave a bitter taste in a sauce if you add too much beer. 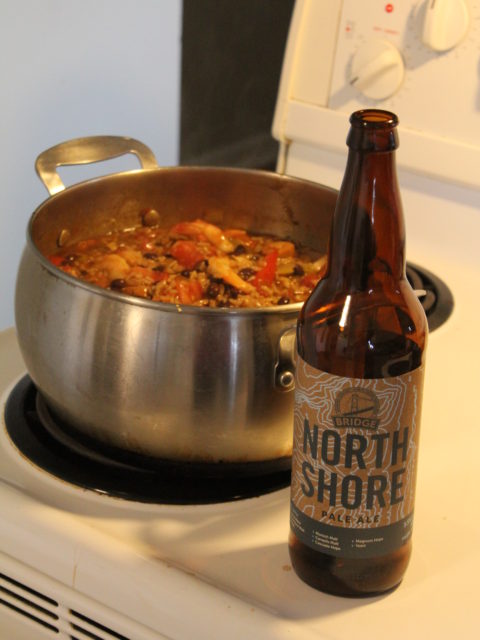 Beer adds a rich, earthy flavor to soups and stews that makes them taste like they’ve been simmering for hours. Beers with a sweet or nutty taste can add depth to desserts. And don’t worry about getting drunk – virtually all of the alcohol evaporates during the cooking process.

Check back here for recipes and other yummy ideas for cooking with beer as well as great pairings!

For more ideas on how to cook with Craft Beer check out this website: