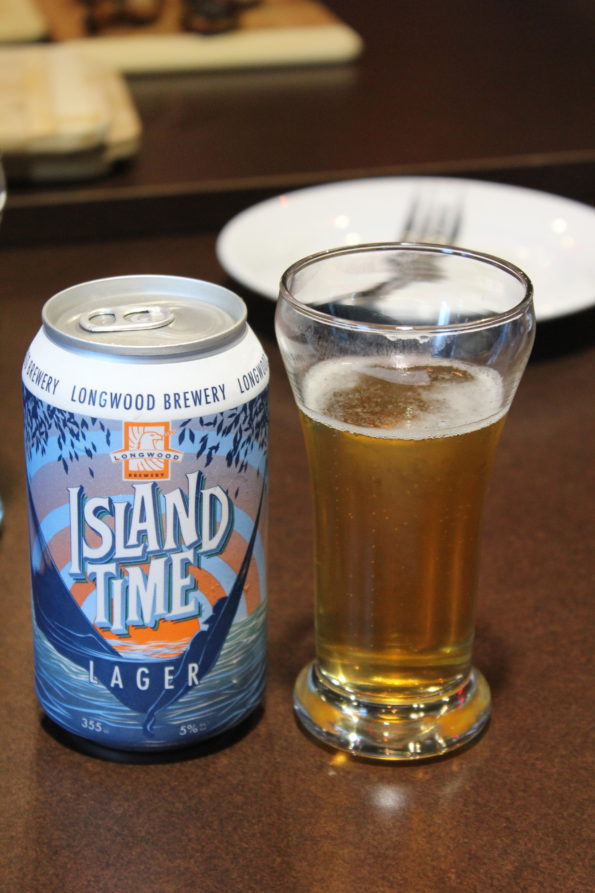 Longwood Brewery is running like a well oiled machine.  The brewery located on Boxwood road here in Nanaimo BC opened in the spring of 2012 and has since began to produce some of the finest brews that Vancouver Island has to offer.  They have doubled their capacity since their first batch of Stoutnik and have plans to expand further in the fall of 2016 when they will be producing 3500 hl. a year.  With the introduction of tall cans to their line-up, consumers can find Longwood products on the shelves in most liquor stores both in four-packs and as singles. Tonight I have the pleasure of sampling their beer with fresh BC local food pairings courtesy of Debbie at Lucky’s liquor store here in Nanaimo. 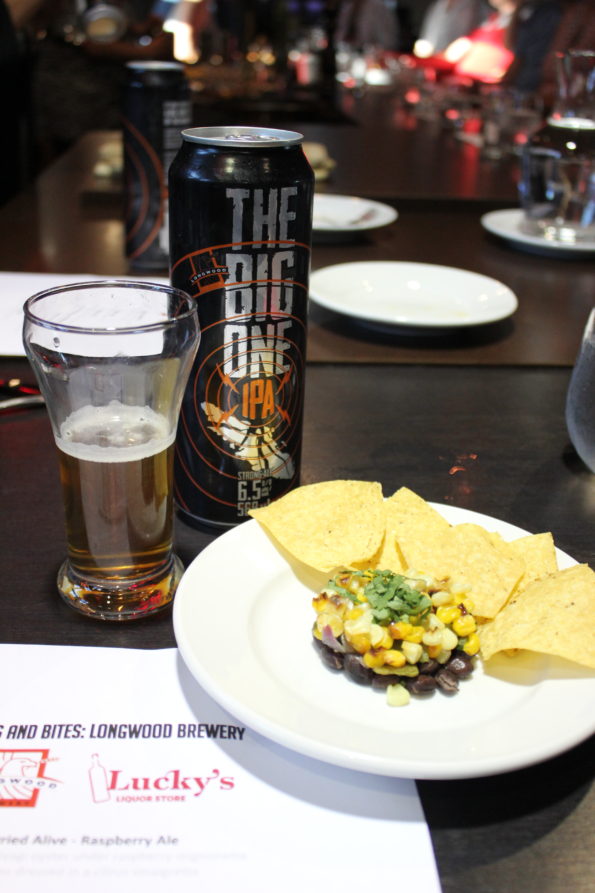 Harley Smith who is actually the head brewer for Longwood Brewery was not available for this event but his fill-in Pete Kis-Toth who is the Director of Operations for Longwood was more than gracious as a host.  He is very knowledgeable about the brewery’s product, it’s history and their future plans.  He is a beer aficionado and has many years of brewing experience to draw from as he effortlessly teaches the diners the basics of craft beer.

Co-hosting with Pete is Lucky’s newest team member, replacing Jodie Robertshaw as their Events Coordinator and Host; Nikki Beach. Nikki comes from the Beach Club in Parksville and has a lifetime as an amateur chef and years of training and work experience to inspire him in the mezzanine kitchen during his events.  This Brew Master’s dinner with Longwood is his first shot at hosting an event at Lucky’s Liquor and he absolutely nailed it!

His menu included pairing their “Berried Alive” with a Fresh Oyster and garlic appetizer with greens and raspberry vinaigrette. 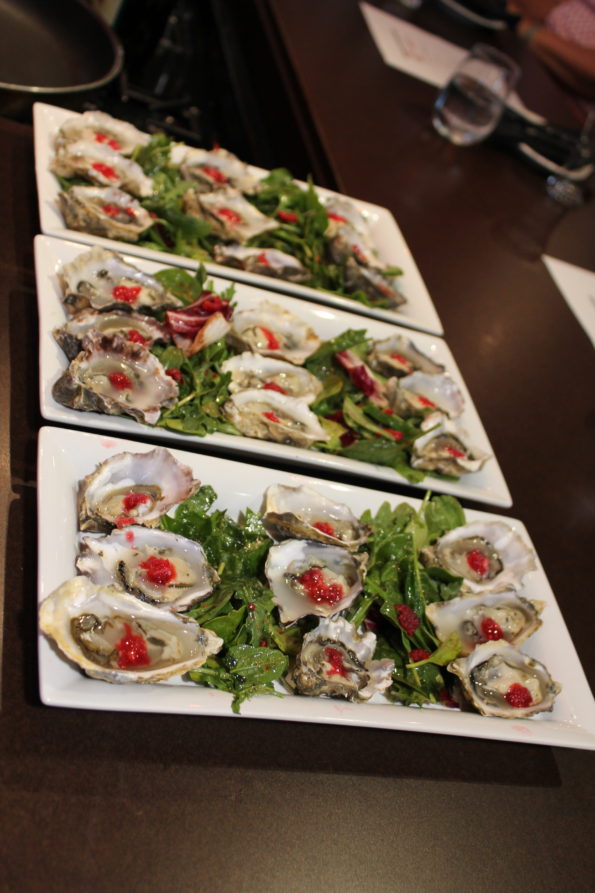 Next came “The Big One”, Longwood’s India Pale Ale which paired very well with the Spicy Corn and Black Bean salad.  The Big One is one of the milder I.P.As around this summer and is a good beginner for those weary on the hop-forward flavour profile of an India Pale Ale.

The Lemongrass Chicken Lolipop Drummets with garlic chilli oil were a tasty hit that paired beautifully with the Island Times Lager.  The lager is much more malted than the other beers we are tasting this evening and quickly became a favorite of Nikki’s audience.  Although these first three offerings are avaliable by can and growler only, their “The one that Got Away” Red Wheat Ale however is available in a 650ml. bomber size only. Although malty like the Island Times, it gains a unique flavour and colour to it by using different malted grains and the addition of wheat to form this heady red ale.  Nikki then paired it with his Pork Tenderloin Wellington with apple raisin chutney; to die for!  The succulent piece of meat could not have turned out any better and complimented the red ale perfectly, balancing out the sweet and the savory.

The crown on the top of this feast had to be the Stoutnik, a Russian Imperial Stout that Longwood has been producing for eons, made into an ice-cream float.  Yes, that’s right, a beer-float!  Nikki dressed the vanilla ice-cream up a little by adding cinnamon and a drizzle of caramel to the fancy wine glass then instructed us to pour our Stoutnik right on top after trying each on their own. Who would have known that such a combo would create a party on the pallet! 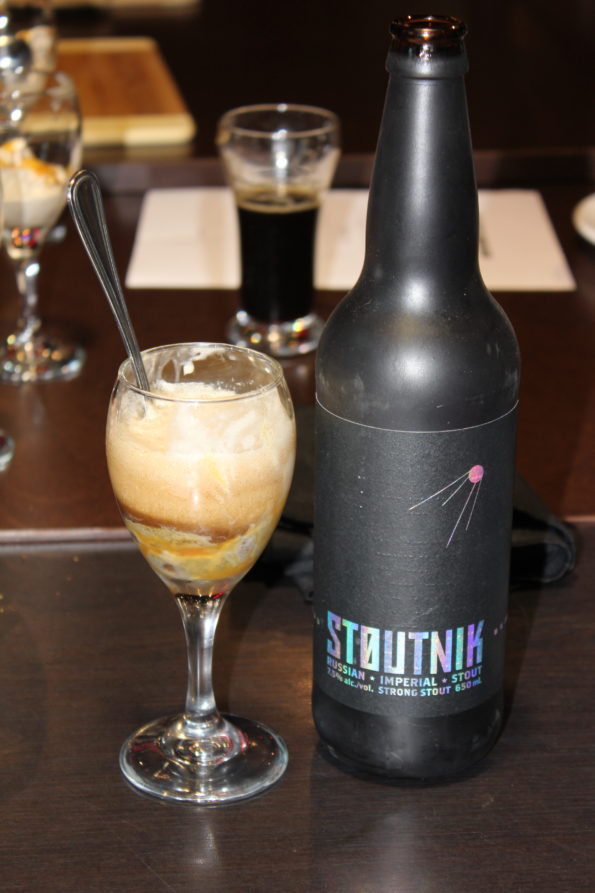 Well done, my young, eager and passionate foody-friend.  You will make a great addition to the Lucky’s team.  I look forward to attending more of your beer and food pairing events and will highly recommend it to anyone looking for a night out in Nanaimo.
Stay tuned for more on Longwood and their August 2016 Longwoodstock! 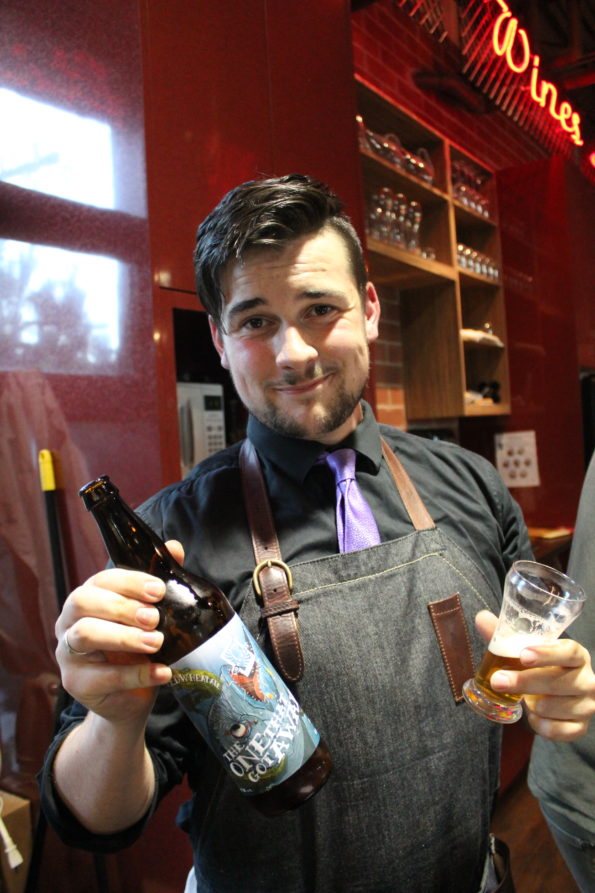